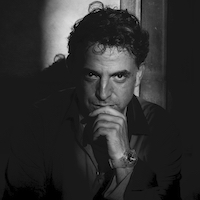 Born in Ramat Gan in 1967, Etgar Keret’s books were published in more than 45 languages. His writing has been published in The New York Times, Le Monde, The New Yorker, The Guardian, The Paris Review and Zoetrope. Over 60 short movies have been based on his stories. Keret resides in Tel Aviv and lectures at Ben-Gurion University of the Negev. He has received the Book Publishers Association’s Platinum Prize several times, the Prime Minister’s Prize (1996), the Ministry of Culture’s Cinema Prize, the Jewish Quarterly Wingate Prize (UK, 2008), the St Petersburg Public Library’s Foreign Favorite Award (2010), the Newman Prize (2012), the Charles Bronfman Prize in recognition of his work imparting an inspiring Jewish humanitarian vision (2017) and the Sapir Prize (2018), Israel’s most prestigious literary award, for his latest book “Fly Already”, which has also been shortlisted as one of the best books of 2019 by the Financial Times and the New York Public Library.

In 2007, Keret and Shira Geffen won the Cannes Film Festival’s “Camera d’Or” Award for their movie Jellyfish, and Best Director Award of the French Artists and Writers’ Guild. In 2010, Keret was honored in France with the decoration of Chevalier de l’Ordre des Arts et des Lettres. Keret’s book, The Seven Good Years, was chosen by The Guardian as one of the best biographies and memoirs of 2015. In November 2018, a Dutch documentary film Etgar Keret: Based on a True Story won the Arts Programming category at the International Emmy awards. The Middleman, a French speaking mini-series, starring Mathieu Amalric and co-written and co-directed by Keret & Geffen had aired in ARTE in May 2020. It received rave reviews in the French press and had won the best screenplay award at the La Rochelle fiction TV festival in France.