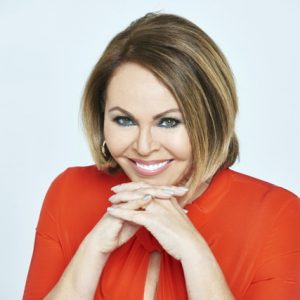 Peabody award-winning anchor, María Elena Salinas, who is described as the “Voice of Hispanic America” by the New York Times is one of the most recognized and influential journalists in the United States. She is currently a contributor with CBS News across all platforms. After over three decades as co-anchor and correspondent of Noticiero Univision and co-host of news magazine “Aquí y Ahora” Salinas began a new chapter in her career as an independent journalist and producer and principal of MES Multi-Media LLC. In one of her first projects she hosted and executive produced “The Real Story with Maria Elena Salinas” on the Investigation Discovery network. As part of her philanthropic work Salinas serves on the board of the Hispanic Scholarship Fund and has herself been awarding scholarships to journalism students for over two decades through the National Association of Hispanic Journalists. She is also on the advisory committee of She Works and a member of the Smithsonian’s American Women’s Initiative Advisory committee.